Written by Thomas Stallings
Updated over a week ago

In your squad list you will notice the # Seas Util column: 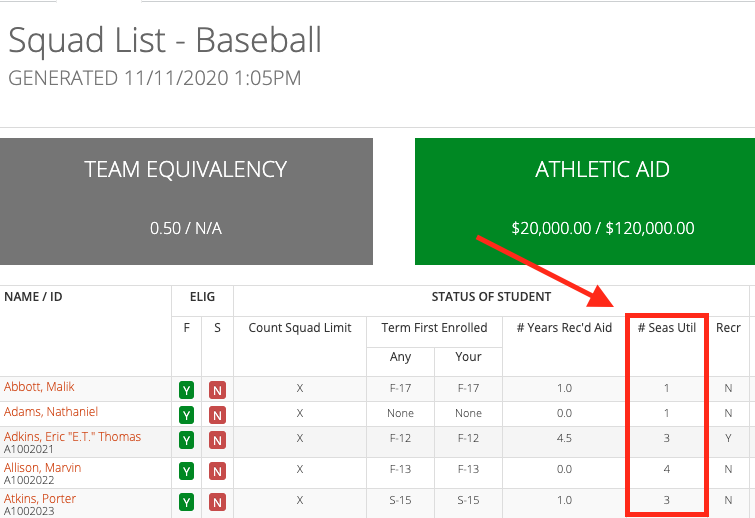 This column is calculated from the sum of two places on the Student-Athletes profile. The Count Towards Seasons Used and the field "Previous Number of Seasons of Competition Used". Both are described below.

Count Towards Seasons Used is a way to designate seasons used inside of ARMS. For every roster year a SA has been a member of the team, you will have the ability to mark the year as counted. Check out the hyperlink for more info!

You can update this individually on the SA's profile in the Roster & Eligibility Widget by clicking on the details for the year you want to edit: 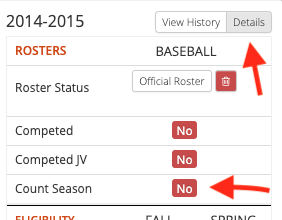 You can also edit in bulk by going to the correct Roster Year (current or previous) and bulk updating the count for that year to be yes (check marked in the value box, shown below)

The "Previous Number of Seasons of Competition Used" field is a way to designate seasons used outside of ARMS (transfers who have roster years that would not be in ARMS to mark as Counted). This field can be found under the Compliance tab at the bottom of the SA profile.

An example of when to use this is a transfer that played 3 years at a previous institution. In this situation you would mark this field as 3 (shown above) because the SA has 3 previous years counted on a roster outside of ARMS.

This count is the SUM of those two, so if you mark three previous years as "COUNTED" in the Roster & Eligibility Status widget and then update the "Previous Number of Seasons of Competition Used" to 3 as well, your total on the Squad List will be 6 (3+3=6).

Understanding both will allow you to correctly calculate the # Seas Utl on the Squad list for you entire team no matter if they are a 6th year senior of a Graduate Transfer.